Peering is a process by which two Internet networks connect and exchange traffic. It allows them to directly hand off traffic between each other’s customers, without having to pay a third party to carry that traffic across the Internet for them. Peering is distinct from transit, the more usual way of connecting to the Internet, in which an end user or network operator pays another, usually larger, network operator to carry all their traffic for them.

Network operators may peer for many reasons. Sometimes it’s cheaper to hand off traffic themselves rather than paying somebody else to do it. Sometimes it gives greater control over their traffic flows, or allows them to better serve local populations. If you’re paying EUR 10 per Mb/s per month, and somebody you are pushing 100 Mb/s of traffic to is willing to accept that traffic from you for free, you could save EUR 1,000 per month. In practice, things are not quite so simple, as the infrastructure required to peer also costs money, but that gives a basic idea.

Network operators who peer have more control over their traffic. If an operator sends or receives traffic over a transit connection, it goes across the Internet via whatever path the transit provider decides to use. If there’s a problem – slow connections or packet loss, for instance – the network is at the mercy of its transit provider. A network operator who peers has more control over external paths, and can easily adjust routing to avoid problem network segments. Peering can keep traffic local and improve performance. If a network’s transit provider has local connectivity, this may be moot. However, transit providers often cover large areas, and connect to other networks in few locations. If you buy transit in Stockholm, for instance, you may find that your path to another Stockholm network goes through London or Amsterdam. Peering can keep traffic local, providing faster connections between the two networks.

There are several types of peering connection. Peering just means that two networks connect somehow. This could involve running a circuit across town from one network’s facility to the other’s. However, that arrangement requires covering the cost of a metro circuit between the peers. With a lot of peers, that would get expensive fast.

There are also several types of peering arrangement.

Under the usual definition of peering, the networks exchange all traffic from any of their customers to any of the other’s, any where in the network. A variant of this is for networks to exchange traffic only between certain customers, generally customers in a certain region. For instance, a global network peering with a local Swedish network might use the peering session only for traffic from and to its Swedish customers. This would relieve them of the burden of having to haul traffic all over the world to the Swedish network, when the Swedish network wasn’t doing the same for them. This is known as partial or regional peering.

Another variant is what’s sometimes called “paid peering”, also known as “partial transit.” This looks to those outside just like a regular peering session, but one network pays the other to participate in the arrangement. This is done when one network values the arrangement more than the other does. This is normally something arranged between the two networks, and not something an exchange point intervenes in. 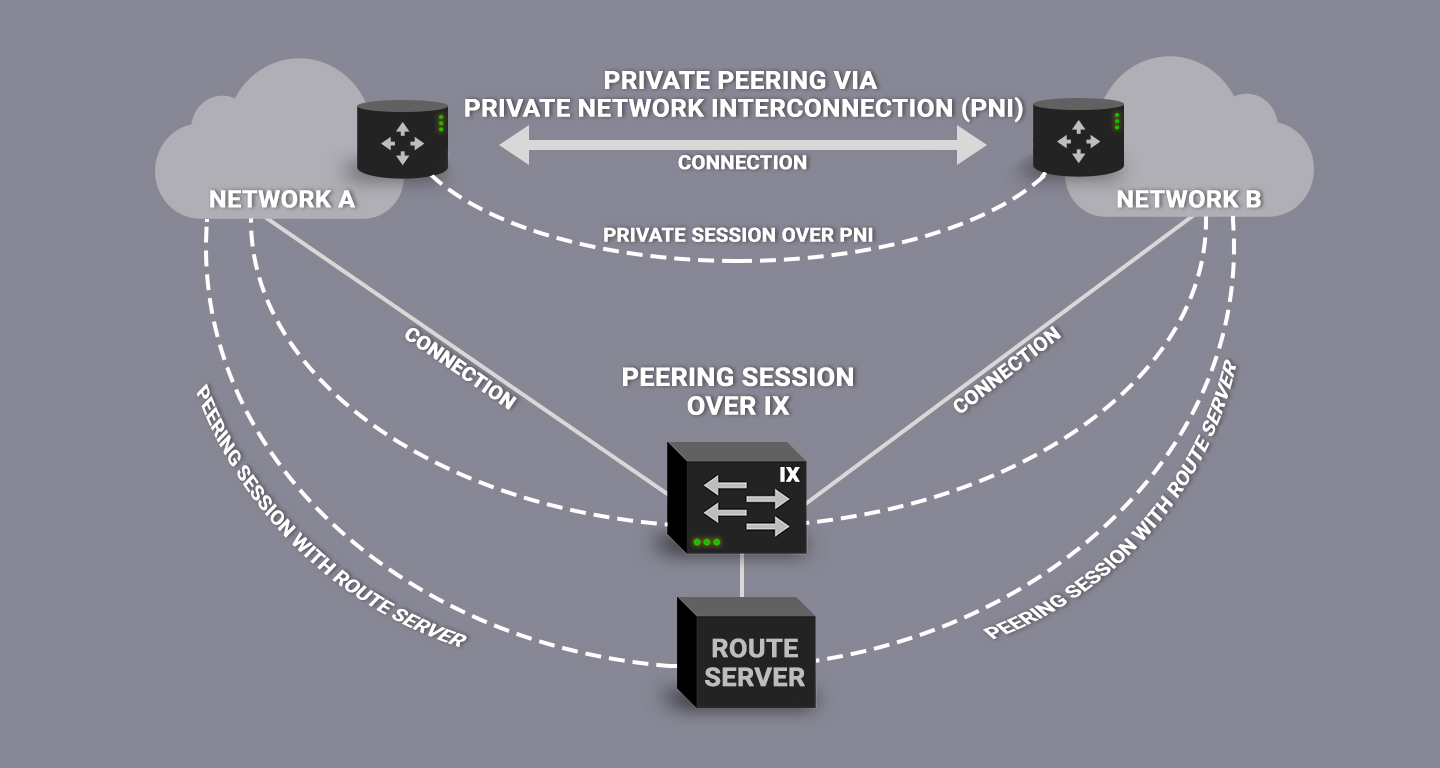 You will need somebody to manage your peering for you. They need to figure out which networks you should be peering with, contact those networks, and make arrangements. Sometimes that means sending email, and sometimes it involves making phone calls or seeking out other network operators’ employees in person. Many peering arrangements are facilitated through face-to-face meetings so if you can, make sure to go to the peering forums and the IXP meetings. Some networks will say yes or no without much discussion, but in some cases you may need to explain how much traffic is being exchanged between your network and  theirs, and why peering would benefit them.

You will also need to make some decisions about your own peering policy. Will you peer with anybody who asks, or will you analyse each request and make case-by-case decisions?

What’s right for you?

Whether peering is right for you will depend on several factors.

Some of them have to do with economics. How much traffic do you have? How much are you paying for transit? How much of that traffic could be easily shifted to peering? How much will peering cost, including the connectivity and people to manage it? Will it save you money? These costs are easy to put into a spreadsheet and see how they stack up for you.

Then there are the less quantifiable, but equally important factors:

How much control do you want over your traffic? Do you prefer hands-on involvement in your traffic routing, or is that something you’d rather let somebody else handle? Does your network have any requirements that the available transit providers can’t deal well with? Is speed and latency important for you? Is keeping traffic local a priority for you? Is the robustness, stability and efficiency an exchange point offers important to you?

If the benefits stack up favourably, peering may be the right thing to do.

Want to find out more? Let us know.

Tags
IX
Educational resources
Educational resources
What is an IXP?
An Internet Exchange Point (IXP) is where networks connect and exchange traffic. Find out more about who can benefit from an IXP, how networks typically connect, and the technical details of how an IXP works.
IX
IX FAQ
Here we answer some of the most common questions about peering, IXPs and Netnod IX.
Documents & Downloads
IX Materials
Netnod case study with GavleNet
Interconnecting Scandinavia and Europe
Telia Carrier becomes Netnod Reach partner
Netnod IX Sundsvall expands to Gävle
Remote IX
Checklist-How to get the most from your port
Netnod comments to memorandum with ID I2019/02319/D
Netnod 400G Press Release
Peering for beginners PDF
All IX materials